One of my personal highlights of the recent Barcelona Summit was a session by Mirantis engineers Elena and Oleg titled “Is OpenStack Neutron Production Ready for Large Scale Deployments?”. In the session they outline a comprehensive control and data plane testing effort, run on two labs, one with 200 nodes and run of the mill hardware, and the other with 378 and top of the line hardware, all running the Mirantis distribution based off Mitaka with standard ML2/OVS, DVR, L2POP and VXLAN. In the session they show near line-rate speed for east/west and north/south routing with jumbo frames and VXLAN offload enabled. They were also able to spawn 24,500 VMs across 125 networks without errors and low CPU consumption.

Can the Neutron reference implementation scale? You bet your tush it does. It's come a long way since Diablo.
https://t.co/dsLmTZMnq7

Turning our eyes to adoption, the OpenStack Foundation conducts a usage survey every 6 months. Looking at the April 2016 user survey, we can see that ML2 with Open vSwitch and Linux Bridge dwarf other solutions.

Examining the openstack/neutron project via Stackalytics we see that ML2/OVS has a rich and robust community with 20 companies contributing over 5 patches in the Newton time frame. 779 people have contributed at least 1 patch to Neutron since its inception, 215 of which during the Newton timeframe. Some of the effort targeted the base Neutron platform, e.g. configuration options, database work, versioned objects, quotas or other in-tree ML2 drivers such as SRIOV. Looking at the contribution of everyone who has committed at least 5 patches in the Newton cycle, we are left with 50 authors, 42 of which contributed at least 1 patch to ML2/OVS. 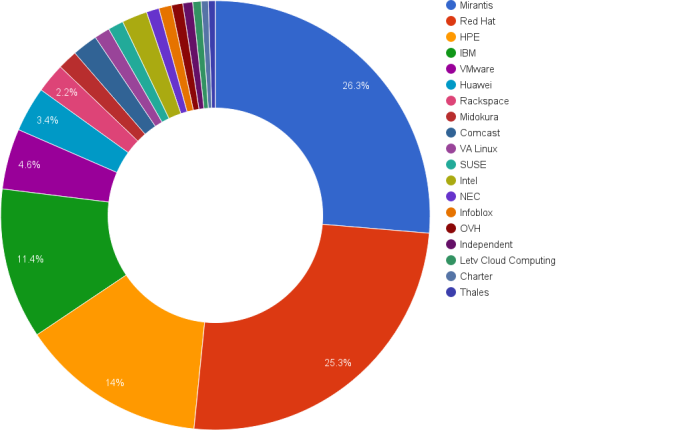 Taken from http://stackalytics.com/?release=newton&module=neutron&metric=commits after filtering authors with less than 5 patches

Looking at the interactive version of the OpenStack user survey we can see that ML2/OVS is the most popular choice by an order of magnitude regardless of deployment size. And so to answer the question: “Is OpenStack Neutron ML2/OVS Production Ready for Large Scale Deployments?”. Yes, it is, of course it is. It has been for some time now.