Where Am I?
* Overview and East/West Traffic
SNAT
Floating IPs

DVR aims to isolate the failure domain of the traditional network node and to optimize network traffic by eliminating the centralized L3 agent shown above. It does that by moving most of the routing previously performed on the network node to the compute nodes.

Each of these traffic categories introduces its own set of complexities and will be explained in separate blog posts. The following sections depicts the requirements and the previous blog post lists the required configuration changes.

In this example, the blue VM pings the orange VM. As you can see via the dotted line, routing occurs in the source host. The router present on both compute nodes is the same router.

As we can see, the same router is present on two different compute nodes:

The router namespace was created on both nodes, and it has the exact same interfaces, MAC and IP addresses:

For the purpose of east/west traffic we will happily ignore the SNAT / centralized portion of distributed routers. Since DVR routers are spawned on compute nodes, and a deployment can potentially have a great deal of them, it becomes important to optimize and create instances of DVR routers only when and where it makes sense.

Before tracking a packet from one VM to the next, let’s outline an issue with the nature of distributed ports. As we can see in the ‘ip address’ output above, DVR router replicas are scheduled to all relevant compute nodes. This means that the exact same interface (MAC and IP address included!) is present in more than one place in the network. Without taking special precautions this could result in a catastrophe.

The chosen solution was to allocate a unique MAC address per compute node. When a DVR-enabled OVS agent starts, it requests its MAC address from the server via a new RPC message. If one exists, it is returned, otherwise a new address is generated, persisted in the database in a new Host MACs table and returned.

This address is then used whenever traffic from a DVR router leaves the machine; The source MAC address of the DVR interface is replaced with the host’s MAC address via OVS flows. As for the reverse, it is assumed that you may not connect more than a single router to a subnet (Which is actually an incorrect assumption as the API allows this). When traffic comes in to a compute node, and it matches a local VM’s MAC address and his network’s segmentation ID, then the source MAC is replaced from the remote machine’s host MAC to that VM’s gateway MAC. 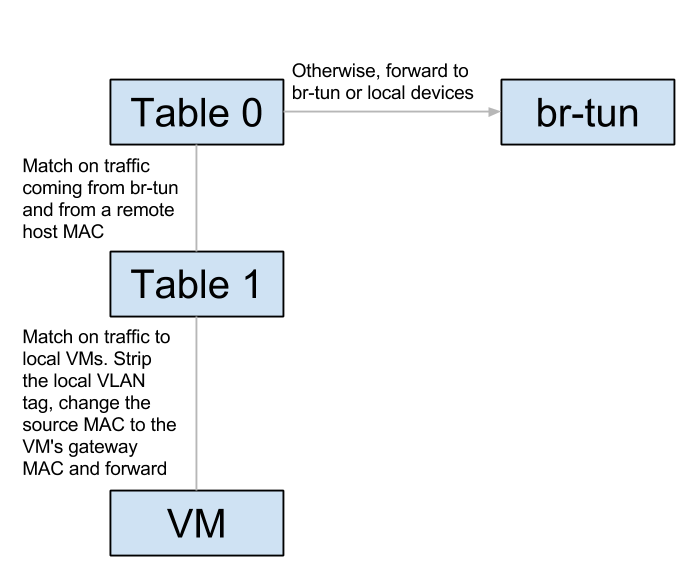 Let’s track unicast traffic from the local VM ‘blue’ on the blue subnet to a remote VM orange on the orange subnet. It will first be forwarded from the blue VM to its local gateway through br-int and arrive at the router namespace. The router will route to the remote VM’s orange subnet, effectively replacing the source MAC to its orange interface, and the destination MAC with the orange VM’s MAC (How does it know this MAC? More on this in the next section). It then sends the packet back to br-int, which forwards it again to br-tun. Upon arrival to br-tun’s table 0, the traffic is classified as traffic coming from br-int and is redirected to table 1. The source MAC at this point is the router’s orange MAC and is thus changed to the local host’s MAC and redirected to table 2. The traffic is classified as unicast traffic and is redirected to table 20, where l2pop inserted a flow for the remote VM’s orange MAC and the traffic is sent out through the appropriate tunnel with the relevant tunnel ID.

Let’s observe the ARP table of the router on the first node:

Permanent / static records, that’s curious… How’d they end up there? As it turns out, part of the process of configuring a DVR router is populating static ARP entries for every port on an interface’s subnet. This is done whenever a new router is scheduled to a L3 agent, or an interface is added to an existing router. Every relevant L3 agent receives the notification, and when adding the interface to the router (Or configuring a new router), it asks for all of the ports on the interface’s subnet via a new RPC method. It then adds a static ARP entry for every port. Whenever a new port is created, or an existing unbound port’s MAC address is changed, all L3 agents hosting a DVR router attached to the port’s subnet are notified via another new RPC method, and an ARP entry is added (Or deleted) from the relevant router.